A green Cadillac, its nose crumpled against the frame building, a man hanging half out of the window on the driver’s side. Carla stood beside the car, her mouth crammed full of shaking fingers. For just a moment it didn’t register. I saw the man. I saw Carla. The scene was lewdly illuminated by the stripping of red neon across the eaves of the building. Then I saw the blood.

Kind of a random choice—aren’t mine all?—but I’ve meant to read this one since I picked it up, and I’m going through Gold Medal books at the moment. Philip Race was actually E. M. Parsons, who used his real name when publishing things like westerns for Dell and Gold Medal. (I’m also pretty sure that’s the same Parsons who wrote an episode of Bonanza). Of his two Gold Medal crime novels, Self-Made Widow and Killer Take All, only the latter has seen a recent reprint, as a Kindle Ebook. (You can preview the first chapter on Amazon; I did, and liked it enough to pick up a used paperback copy for $1.35.) 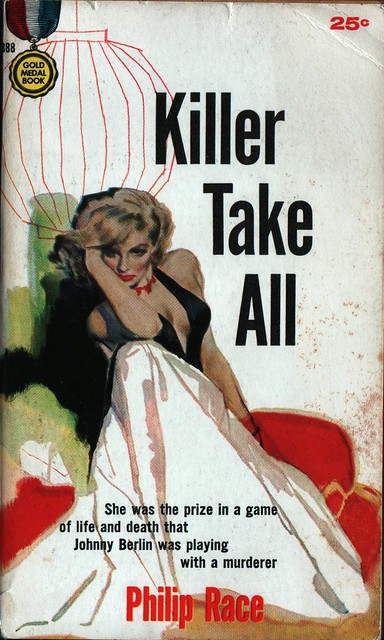 “They called him Johnny Berlin and he had an instinct for cards… for trouble… for dames.” That little back-cover snippet tells you all you need to know about Johnny; he’s decided to leave Reno and Vegas behind in favor of the Oregon coastline. Johnny gets lost en route to Portland, and stumbles into a shady-looking deal. Asking for directions gets a gun stuck in his face by one Marino Donetti, but soon enough he makes his way into the tiny town of McKaneville, only town in the area with a hotel. He runs into an old flame of his who asks Johnny to help her current husband, whose bar and game room has a high-roller about to bust his bank; after saving the guy’s bacon, Berlin’s hired to help reform the casino to become profitable.

But there’s a lot more at play than Johnny realizes. Donetti was trying to set up his own Gambler’s Protection Agency, building a local gambling syndicate; the local casino owners are split between support for Donetti’s GPA—because Donetti’s rumored to have capital-s Syndicate (e.g., Mob) connections. And even though he turned Donetti’s job offer down, Berlin’s in the middle of a very tight spot: everyone saw him come into town with Donetti, but he’s working for a man against syndicating, so each group suspects him of working for the other side. And when Marino Donetti gets murdered—with Johnny Berlin second on the scene—the complications and intrigues start pushing Johnny in directions he wasn’t prepared to go.

The story rips along at a dizzying pace; Johnny Berlin wanders in an out of trouble every couple of pages. He’s a bit player in a larger game, and without realizing it, his arrival stirred up more activity and attention than he needed. It’s filled with all the stock noir cliches: all the women are leggy and beautiful; gangsters are either quite eloquent or speak like Muggsy the Dockyard Worker, fuhgitabbahtit youse guise. There’s an obscene number of characters, almost too many to keep track off; they all have normal, small-town names, so you have to keep track of Carla and Sheila and Gina and Fran and Bev. Plus all the men-folk who aren’t Marino Donetti or Police Inspector French, who had catchy enough names for me to remember them.

Race/Parsons’s writing style is rapid, pure hardboiled stuff, though he does have the habit of using oddly ornate descriptions and similes, such as comparing people’s eyes to crème de menthe frappe or soft-boiled lemon drops. Apparently he had a thing for eyes. Or body parts, since he goes after lips in the same style later on. Other than its dizzying speed and almost overwrought similes, the prose is good. It’s got one of those fast-talking yet terse hardboiled protagonists, first-person PoV, and when the metaphors aren’t too flowery the writing has a nice shine to it.

Fast-paced and complex, with a protagonist trapped and out of his league in a web of unfamiliarity, I found Killer Take All a shaky but enjoyable read. It’s a good old noir novel with a lot of texture, and if you can keep track of its many characters, twisty-turny plot, and breakneck pacing, you end up with a slick little lost novel. I wouldn’t say it’s the best of its kind I’ve read, but it wasn’t bad by any stretch of the imagination, and might be interesting to vintage crime readers.