Sometimes, I read some of the trashiest stuff imaginable because the cover looked interesting and it cost fifty cents. (I feel like I’m the literary equivalent of that guy with a masters in film and video who only watches/reviews trashy B-movies. Because somewhere, sometime, someone will be curious about what all these novels were like.) It’s a lot more attractive when the author is at least a famous name, like Brunner or Silverberg or, in this case, Lester del Rey.

Del Rey is an important Golden Age figures less because of what he wrote and more from what he did. Not that his writing is bad—he has several good compilations, including the solid Early Del Rey, just that his most famous book is probably Nerves. (The other candidate, the juvenile Tunnel Through Time, was used in middle-school classrooms in the ’60s and ’70s.) Which says a lot about his familiarity: unless you read it in back in the day, I’d bet you’ve never heard of it. No, del Rey was the chief editor for a number of Golden Age magazines (while submitting to Campbell’s Astounding and giving Heinlein a run for his money in the juvenile hardcovers department) before becoming the most successful editor of Ballantine Books—so successful that they named their speculative fiction imprint after him, Del Rey Books.

So, Day of the Giants, the only perfect novel to double with Ed Hamilton’s A Yank at Valhalla. 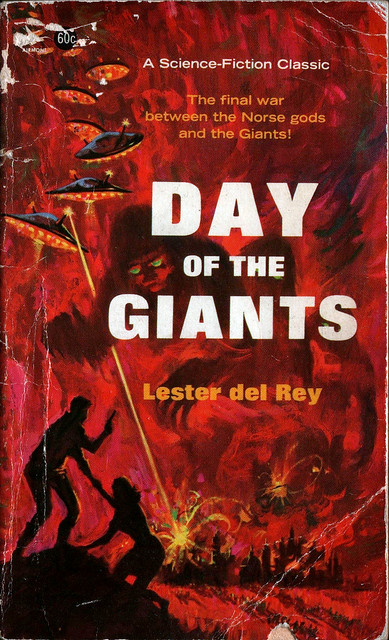 Leif Svensen is living in the midst of Fimbulwinter, but he doesn’t know it yet. For some reason, the world at large is confused and alarmed at the constant snowfall through June and beyond, much less the lack of food, vigilante violence, far-off wars, and general irritation, but nobody seems to give it much thought beyond martial law and weathermen shrugging confusedly. I’d think that people would be curious, or at least remember the Norse myths, but no; it’s all grim desperation and insane violence, neither of which seems to bother Leif too much.

Anyways. Leif’s told by a sympathetic neighbor that the community is out to get his dog, because something dog-like has killed their remaining chickens. (Poetic Edda spoiler: Fimbul wolves!) Leif sets out to deal with this, but only after he finds his madcap brother Lee, who’s busy (e.g., sleeping around with the local women); before the community can attack, Lee tells some old war stories, there’s speculation about women on flying horses in the sky, then Lee’s old war buddies show up, who turn out to be Loki and Thor. These gods help turn the tide of the neighbors’ assault, more or less.

See, it turns out Lee and Leif are needed in Asgard, and the best way to get such heroes to the realm of the gods is to put them near death. Leif, being something of a coward, gets hit over the head and not actually injured. Loki tricks some Valkyries into taking Leif while Lee is still fighting, and sets him up as a hero in the Norse realm… just before Thor arrives with Lee, the real hero they were looking for. The gods aren’t too pleased to find that Leif is kinda sorta worthless. After bluffing his way past death with an automatic pistol, Leif’s told to take command of the dwarf smiths and make more modern weapons to arm the gods’ army of heroes, the Einherjer.

The problem is, Leif can’t: he’s a farmer, not a gunsmith. The gods are dense as bricks and hide-bound by tradition and predictions, save for Loki, and the Einherjer hero-warriors are somewhere between stroke victims and sub-idiot man-children. (I imagine it’s from mellenia of constant fighting, kind of like how boxers end up with bad mental problems from all those blows to the head.) And Leif’s got an on-off romance with a goddess to deal with; she’s miffed Leif lied to her, isn’t a hero, and is a creature of Loki. What Leif can do, however, is teach the dwarfs to make grenades… and between a magical spyglass and the dwarfs knowing every element in the periodic table, this includes U-235 grenades as well.

Will Leif’s technological knowledge and logical prowess help stave off the attack of giants when Ragnarök comes? Who will rule Earth, the dull, humorless, bloodthirsty gods, or the cruel and tyrannical giants? Will the Einherjer manage to kill Leif by accident? Can Leif gain the ever-lasting love of the virgin goddess? The answers are predictable, but there’s a startling amount of developments and twists throughout the narrative. Leif has a lot to contend with, such as being a coward for starters.

The novel reads like a juvenile, with its simplistic setting, plot, and characters. Its fight scenes are anything but—axes and grenades are not pretty weapons. Blood runs, steel sparks, curses fly… it’s an action-packed little novel, standing 128 pages in length. Turns out it’s expanded from “When The World Tottered,” the cover novella to the December 1950 issue of Fantastic Adventures. (This was the more fantasy-prone, more juvenile little brother to Amazing Stories, so the resulting story shouldn’t be a surprise.)

Del Rey has a very basic and unassuming style. Not that there’s anything wrong with it—the pacing and writing are both solid, the characters rounded if simple, the plot a little straightforward. No, it’s that del Rey just doesn’t have anything to identify his works as a del Rey. He occupies that wide middle ground of competent writing with no personal stylistic themes, no tell, no style to think of when one says the name “Lester del Rey.” Again, not that there’s anything wrong with it, unless you count “didn’t stand out from the crowd” a major flaw.

This novel is a stark reminder of the malleable border between fantasy and science fiction. When it was written in 1950, fantasy lay somewhere between children’s fairy-tale fables and a less-ghettoized science fiction—it wasn’t for “literary” minded adults, but it wasn’t talked about in the same level of derision as science fiction. And fantasy didn’t have the voice, focus, or popularity of today, until the mid-1960s when Ace and Ballantine went to war over a then-unknown British professor’s mythic novel trilogy. Thus Day of the Giants was published as “science fiction,” even though today it has little enough science to catch science fiction readers’ fancy (Norse gods!) and just a tad much modernity for the palate of fantasy fans (nuclear grenades!). (This book is the reason for the Science Fantasy category.)

Is Day of the Giants a bad book? No. Neither is a great one; instead, it’s straightforward entertainment. There’s a surprising amount going on within the text—SF action-adventure novels can feel padded or strained, but here, there’s enough twists and developments for things to stay interesting. And it follows the sword and sorcery, sword and planet formula to a tee.

It’s a good case of what it says on the tin: a simple adventure novel about a “modern” man transported into the realm of myth to help prevent the apocalypse, with a girl to win and enemies to best. What it aims to do it does competently and with style; I’m not going to sing its praises from every mountainside, but it turned out better than I’d expected. If you enjoy a solid, sword-slingin’ action novel complete with Norse myth, this is a fun and uncomplicated afternoon read. But the fairweather reader has so much else to focus on, particularly if said reader isn’t into pulp.

6 thoughts on “Day of the Giants – Lester del Rey”