Keith Laumer is another second- or third-tier SF author, best known for his Bolo series (about self-aware tanks) and Retief series (satire about an interstellar diplomat). Not that I’ve read any of those, but I have several of his old paperbacks. Laumer also wrote numerous novels dealing with time-travel, alternate dimensions, and parallel worlds; it was apparently one of his pet tropes. His peak years as an author started in 1959 and lasted until 1971, when he suffered from a stroke and was unable to write new work for a while. Dinosaur Beach was one of his many adventures in time and space, finished right before Laumer suffered the stroke. 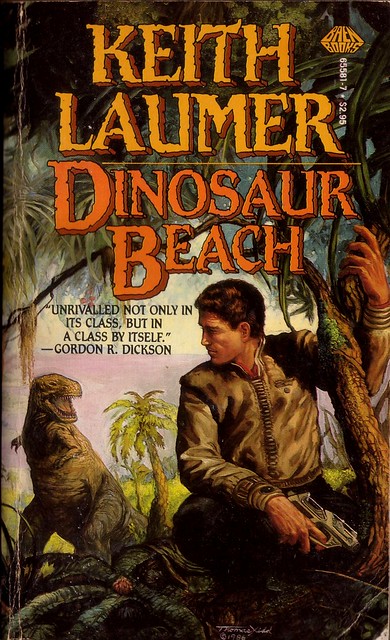 Baen Books - 1986 - Thomas Kidd. No matter how I look at it, that font looks angled. Also, Baen's covers in the '80s don't look as horrible as their modern ones.

In the Fourth Era of time travel, a group called Timesweep has been developed to police earlier time policemen: each successive change to the timestream damages it further, and the Timesweepers are trying to clean out the cleaners so that the timestream can self-repair. It’s an intriguing idea—time policing just screws up time, so let’s police our earlier, misguided policemen—even though it leads to a few plot holes. This is just the tip of the iceberg; the novel has a well-defined sense of its own internal history of time-travel organizations, each learning from the mistakes of a prior, dead-end generation.

Igor Ravel is one such Timecaster, a hardboiled, burnt-out time cop who’s hung-up on the life he had built in 1936 and walked out of when his sleeper-cell mission was over. His job is to take out robotic time cops from the Third Era of time travel; after one such mission, he heads back to his base in the early Jurassic—Dinosaur Beach. Then, the Timesweep encampment comes under attack, and Ravel is stranded in a closed loop in the void between timestreams. Ravel has to untangle this mess to free himself, but his attempts to time-jump out just lead him back to Dinosaur Beach.

DAW Books No. 21 - 1971 - Kelly Freas. The cover I wish I owned (it looks better in real life). Nice contrast of blues and yellows, dinosaurs and mysterious characters, and Freas has a thing for putting clocks on time-travel novels.

There’s some fascinating buildup here: Laumer constructs a lot of technology and history, and some terminology to boot, and doesn’t shy away from incorporating it. There’s a pile of exposition early on that gives a muddled overview of the history of time-travel and its policing, but one that’s rather painless for an info-dump: the novel has a first-person perspective from Ravel’s eyes, and it has the nice hardboiled noir tone that makes things  more interesting and catchy.

Ravel is an interesting protagonist. He’s something of the stock superman-protagonist, with a slew of hidden special powers, and he has the attitude and silver tongue of a Bogart character. On the other hand, he did screw up enough to strand himself in time. And he never had the post-mission mind-wipe he was hoping for, so he’s pining for the simpler days of 1936, of his wife Lisa’s icebox lemon pie with the graham cracker crust. (Maybe the lack of a time-wipe explains his noir-style perspective, stuck in the recent past of his cover identity.) On one of his unplanned trips back to Dinosaur Beach, he runs into another stranded Timecaster agent—one who happens to look just like his lost love. (An interesting development, with much built into it over the novel’s course, that’s sadly tossed aside without afterthought near the end. Bah.)

The plot of the novel is a tangled web of paradoxes and muddled time-history. Fitting, considering the tangled mess Ravel gets himself in. Laumer isn’t charitable when it comes to explaining his future time-jargon, and the plot swings wildly this way and that as Ravel tries to fix the problem without fixing the problem—patching time creates more holes than it fixes, remember? The plot’s full of twists and developments, some of which you can see coming a mile away, while others are shocking surprises. This kind of jumbled and predictably unpredictable plot might be headache-inducing for some, but if you just go with the flow and let the novel work itself out—suspend your disbelief—it ends up being an enjoyable ride.

I’m serious when I talk about its chaotic display of time, both alteration and travel. Time-travel plots can be obnoxiously linear and contained: just long enough to last an episode or two of Stargate or Star Trek without causing lasting repercussions. Heinlein’s Door Into Summer is a good example, where the time-travel elements are simple gimmicks to make everything go the protagonist’s way. The only similar comparison I can come up with of is the “Blink” episode of Doctor Who: unpredictable weirdness until the pieces fell into place. Dinosaur Beach is the same way, seemingly random up until its conclusion (and possibly beyond), but I like it for that: its structure and twists are a challenge mirroring the dense philosophical puzzle of time travel, the layered world Laumer has invented.

With the name Dinosaur Beach, and those covers with lurid reptilians stalking about, you’d expect them to play some part in the plot. Nope. They’re around, they wander by a few times, and the Dinosaur Beach Timecaster station plays a large role, but any illusions of overgrown reptiles trundling after the protagonist—see cover below—should be dashed right here and now.

About half the reviews I’ve seen hated the novel, while the other half loved it; keep that in mind before picking it up. And I can see why it isn’t everyone’s cup of tea. Dinosaur Beach is a tangled mess of self-seeding paradoxes and recursive plot twists, with more than a few gaping holes and contrivances along the way, but I found it all the more endearing because of that: it’s a suitably complex plot for a world in which time-travel is a complicated and unpredictable element. Also: if you’re reading time-travel novels in general, you’d better not make “spot the plot hole” into a drinking game because you’d die of alcohol poisoning; Dinosaur Beach isn’t alone on that front.

No, it is not an easy book to follow. Nor is it without flaws. But its handling of time-travel poses a number of intriguing questions about not just time travel and time alteration but of human nature. If you don’t mind its nonlinear narrative and occasional plot hole, you’ll be rewarded with a poignant page-turner. I found it a pleasant thriller that’s also thought-provoking, in particular its final chapters. Alas, in order to reach that grand finale the novel casts aside the plot threads it had built up over most of the book, and because of that, its final twist is lukewarm and lacking the necessary emotional resonance. It’s pretty good as-is, but could have been much better; I have mixed, but somewhat positive, feelings about it.