Over at Science Fiction Ruminations, Joachim posted his top 11 science fiction novels from the 1960s. In the spirit of making lists—because, really, lists are amazing—here’s my top 11 ’60s SF novels.

The ’60s were a fascinating era in the genre’s history: a move away from, and reaction against, John Campbell’s influence (hard science fiction, hopefully prophetic) and his dominance in defining what science fiction was. A modernist New Wave had come to rock the boat. SF took hold of numerous literary tropes, gained artistic and poetic sensibilities, entered philosophical debates, moved into the soft sciences (sociology, psychology, anthropology, political science, and so forth). And, for better or worse, it reflected contemporary society: hallucinogenic drugs widening your perspective, free love and the inclusion of sex as a topic, feminism and the rise of sexuality in SF, the idealistic optimism of the Boomers and Hippies that would flicker out with Vietnam and Watergate as the decade progressed.

I wouldn’t say it’s the best on this list, or that it’s my favorite from the ones on here, but a very good book indeed. Thematically, it’s part of Silverberg’s step into serious SF, away from the pulpy adventure novels he wrote as a college student… and it succeeds with grace and style. This book is many things: a look at time travel, a discourse on criminal justice, the morality and ethics of prisons, a dystopia, a utopia, a group of weary political prisoners abandoned by society, a compendium of trilobites. Review posted.

Probably Dick’s strongest work of the period… at least, I consider it one of his best, if not my favorites. It’s near his best of this decade—a decade filled with some amazing works by Dick. A cerebral head trip of decaying history and corporate sabotage, its protagonists trying to solve the mystery of who died and how, and working to stabilize their situation before they’re wiped from reality. A beautiful answer to Dick’s ultimate questions, “What is human? What is real?” For some readers, the book’s tricks only works once, but I’ve been enthralled by it since the get-go.

‘Nuff said. Love it or hate it, this is the most influential science-fiction book of all time. Despite its length and density, it has plenty to love: space feudalism, political intrigue, vengeance, psionics, developed planetary ecology…

And no, it’s not just because I recently read it. Delany was one of the lightning rods of the New Wave movement, and while it’s erratic and dense, I think that depth and intellectual challenge makes it a standout in the genre. I enjoyed it, even though I didn’t understand it all, but I have a love of SF books I have to think about to understand. So here it goes. Review posted.

While I love Blade Runner (1982) for defining the gritty neo-noir aesthetics that cyberpunk made off with, I’ve always felt the book was the superior work. Granted, it’s a worse detective tale, but a better go at Dick’s continual thought-experiments trying to define reality and humanity. Here, we have a world that’s destroyed itself and drove countless species to extinction; the religion of Mercerism teaches creates a collective consciousness and promotes the preservation and protection of the remaining living organisms. Of course, this means our broke protagonist, a cop who tracks down and kills rogue androids who adopt human identities, can only afford an electric sheep—a cheap knockoff to keep up with the Jonses. You see where this is going before I mention his failing marriage and running affair with a woman who may or may not be an android. A heady and insightful novel that works on so many levels.

Ballard was another of the writers leading the New Wave charge. To be honest I like his short fiction better, but most of what I’ve read of his was from the ’70s, and so doesn’t count. This novel is one of his best: a strange and different look at the apocalypse, a submerging world and a dream landscape… beautiful. You could include two of his other ’60s novels as well, The Burning World and The Crystal World, since they share similar themes: catastrophe and entropy leading to surreal transcendence.

Technically it was a Hugo-winning short story from the ’50s before it became a Nebula-winning 1966 novel. Every now and then, I’ll run across someone who tells me SF is hard to get into because of its emotional distance and focus on cold, hard science fact. This novel is my rebuttal. Told in the form of “progris riports,” a mentally handicapped protagonist rises to epic heights of intelligence with the help of new medicinal miracles, then… There’s a mouse involved. A stark and humane contrast to the ’50s power of just and beneficent science. It’s been a play, it was a short-story, it’s even been a movie. I hope I don’t lose my mad street cred by saying this story brings me to tears every goddamn time.

I’ve always been fascinated by East-European SF, but there’s really not that much out there that reached the States. Stanislaw Lem, the Strugatskii brothers, and a couple anthologies (Last Door to Aiya is the only one I’ve found), that’s about it. Anyways, I find this novel so intriguing because of its approach, the utterly alien nature of…well, the alien; it’s an impenetrable, a total Other. The way extraterrestrials should be. Review forthcoming.

Because of all those college literature courses, I think I’ve read this book more than any other SF novel. Possibly excepting The Stars My Destination and The Book of the Long Sun. Each time, I still find it enjoyable and revelatory, a cynical look at war and love and life from an era so divided over war, love, and life. Maybe it’s a little too cynical, and a little too art-y—the heavy meta-fictional nature is apparent from the opening, authorial anecdotes and revealing upcoming plot developments—but I still think it’s Vonnegut’s best work from the ’60s, an indication of where he went during the next decade.

Take your pick, this was Dick’s decade: he wrote twenty-four novels, for pete’s sake. Martian Time Slip (1964), Three Stigmata of Palmer Eldritch (1965), The Man in the High Castle (1962), Now Wait for Last Year (1966), Dr. Bloodmoney (1965)… all of them fine, fine books. Palmer Eldritch is one of Dick’s fixup novels, and it’s growing on me; Man in the High Castle I found fascinating for its vision but overrated—it’s slice-of-life in an alternate world; conceptually brilliant, yes, but not very stimulating. Even his lesser works, like The Penultimate Truth (1964) or The Zap Gun (1967) are worth reading for the serious fan, head and shoulders above many lesser novels.

Aha, bet you forgot about this one, didn’t you? Didn’t expect me to pull a surprise one-two punch, choosing both a juvenile and a science-fantasy? Back when I was a kid, L’Engle’s work stood apart from everything else on the dusty spiral rack in the back corner, more of a real novel than the varied book series the school had: Goosebumps, Animorphs, those stupid homeless kids who live in a boxcar. I still have the copy I got through the Book Fair in middle school.

You may think otherwise—you’re wrong, of course—but I think it qualifies as hardcore science fiction, and there’s a lot to be said for the novel. It blends the ’60s tendencies towards the surreal, the experimental, and the philosophical, but in a way that allowed it to resonate with both kids and adults. Like Vonnegut’s entry, it won a ton of awards, was immediately pulled out of the genre fiction ghetto and into the heights of literary real estate, and continues to enthrall readers to this day. That it attracts young, female readers is an asset to a genre stung by weird gender issues…

Runner Up: People of the Talisman/Secret of Sinharat by Leigh Brackett (1964)

I almost managed to get through this without tarnishing the list of certified classics, until I remembered these, making one of the best Ace Doubles. Again, these were fixup jobs on old ’40s pulp novellas, so they barely qualify; they’re science fantasy, old-school sword and planet, but Brackett manages to breathe a spark of life into the genre that Burroughs and his many imitators lacked, while leaving the creativity and sheer enjoyment value of Burroughs et al intact. 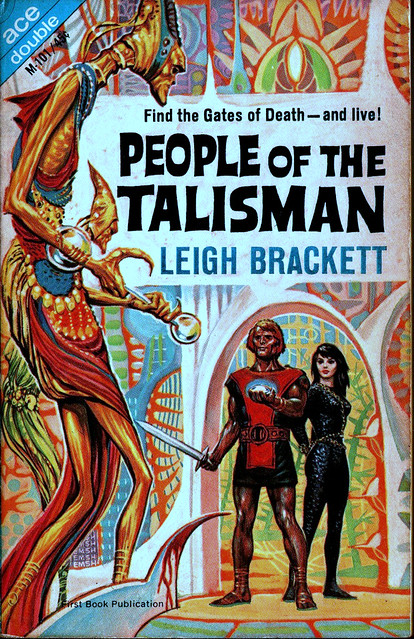 Needless to say, I have a huge stack of ’60s novels in my to-be-read pile and on my buy list, including Nova, Babel-17, Synthajoy, Camp Concentration, Stand on Zanzibar (yes, yes, I know, I’ll read it eventually), Rite of Passage, Pavane, Left Hand of Darkness, This Immortal, and so forth, each in their own way. Thus, this list would probably be different next year, and there might be a good reason your favorite isn’t on here.