From somewhere in his memory, probably from a long-forgotten college anthropology course, he dug out the sentence, “Man stands alone, because man alone stands.” The anthropological implications were many, but Carella chose to ignore them. He liked to think of man as standing. Death knocked a man down. Death stole a man’s dignity. A dead man didn’t care whether or not his hair was parted. A dead girl didn’t worry about whether or not her slip was showing. The postures of death managed to simplify a human being into an angular mound of fleshy rubble. And so looking at what once had been a woman […] Carella felt overwhelming sadness, a sense of tragedy which he could not quite grasp. 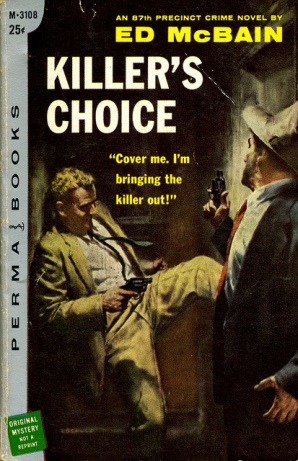 Perma-Books M3108 - 1958 - Robert Schulz. Carella and Hawes looking for a suspect. Things don't pan out like this in the novel.

The book jumps between two unconnected murders. First, Annie Boone was gunned down while working the counter at a liqueur store. The detectives of the Eight-Seven track down and interview many of her friends, relatives, her ex-husband, and her six-year-old daughter. These many shades of Annie: an intellectual, a dunce, a loving wife, a homewrecker, a lush, a fun social-drinker, a polite and proper girlfriend, a loose and adulterous woman. As the investigation drags on, detectives Meyer Meyer and Bert Kling find little to work on, and a multi-faceted victim. It’s a bit on the slow side, but it’s an interesting concept, and the centerpiece of the book—the title refers to which of the many Annie Boones the killer chose to murder.

On the other hand, Roger Havilland, cynic, racist, and once-decent cop corrupted, gets pushed through a plate-glass window when he displays an uncharacteristic interest in helping a hurt young man. Said young man had just held up a store, and was shot in the shoulder by its owner. Havilland’s replaced by Cotton Hawes, smart and cool but plenty arrogant. In the course of that investigation, he almost gets partner Steve Carella killed; he makes a poor impression since he’s moving into the 87th from the rich and prosperous 30th, and isn’t used to life on the tough streets.

The 87th novels are very character-based, with a large cast of well-defined characters, and we get to see their reactions to the goings-on. The daily jokes and ribbing, Havilland’s funeral; most important, how they all talk about Hawes and his colossal blunder over dinner with their loved ones. That soft touch works really well; it’s easy to tell the characters apart since they have strong personalities, their own traits and histories.

I’m not sold by Monica, Annie’s daughter; she’s way too smart for a six-year-old. Ten, definitely; eight, maybe. She’s a crucial part of the investigation, and while she can’t tell time, or figure out that her mother’s never coming back, she did answer a phone call that leads to the murderer’s arrest. Which is told over five pages, where she remembers the conversation in excruciating detail. Even though she couldn’t tell if the caller was male or female. That felt pretty sloppy and unconvincing; kids are hard to write well, and easy to write wrong. In this case, I think McBain fell short.

Perma-Book M4267 - 1962 - the unstoppable machine that is, was, and forever will be Robert McGinnis.

McBain writes some good, realistic dialogue—good, because you’re going to read a lot of it—but he excels at description and world-building, aside from his strong characters. Some of his writing, early on, is a joy to read: strong and evocative. There’s a lot less world-building than in The Mugger, but he makes his fictional, pseudo-New York come alive in small snippets of history and geography. McBain also loves to incorporate real-world police procedures, and inserts several official documents as props to reinforce the realism.

The writing is crisp and fast, and, right off the bat, McBain hit the pages with some strong and beautiful prose; I felt like I was going to quote half the book. It got a little sluggish when wading through interviews that went nowhere in the novel’s second half, which was a disappointment, but I think that was part of McBain’s point: this is just a job for these characters, the occasionally deadly and often dull daily grind. It’s a lot less flashier than your average hardboiled detective tale—we’re dealing with two everyday murders here—but I think its character-centric focus is the selling point, and it makes the real detective aspects work.

Killer’s Choice is a competent police procedural with flashes of brilliance and some very strong elements. On two other hands, it’s something of a disappointment: the investigation slows down to a crawl of worthless interviews, which no amount of interesting characters can make up for, and several other elements were unconvincing or sloppy—as I pointed out, Monica is an apparent idiot-savant six-year-old gifted with the ability to remember phone conversations from last week in detail.

The first half of the book is fantastic, but after that, it dropped down to around average. The novel’s core idea about the multi-faceted victim is damn good, though I wish it was fleshed out more. All told, good, but not great; something for the completist, or diehard fan of Ed McBain or police procedurals, but not a great starting point. I thought The Mugger was better.