One wonders if Theseus built the maze as he wandered it.”

“I don’t think so,” I said, defensive and dry. “The stories give you a law to follow—”

“—that you can either break or obey.”

“—and you can either fail that goal, succeed, or surpass it.

The Einstein Intersection is a tough novel for me to review, given how much goes on within its short hundred-and-fifty pages. And that is a drop in the bucket compared to its cerebral nature and varied nuances; a deep novel if there ever was one. That striking depth, that cause to stop and ponder to rationalize a novel’s implications… that’s the same reason I find authors like Kurt Vonnegut, Philip K. Dick, and Gene Wolfe hard to review, also why I love reading their books; which should reveal my feelings towards Delany right off the bat. 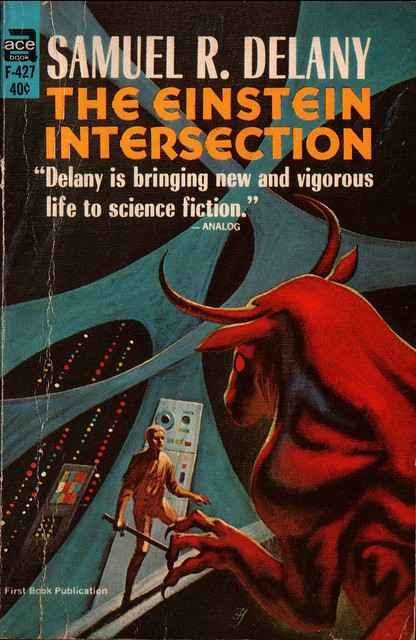 Humanity has abandoned Earth long ago; it’s been inherited by a group of aliens with malleable genetics, struggling to retain a unified physical norm in the wake of run-amok mutation. They even adapt titles, Lo, La, and Le, to signify a “functional” male, female, or androgyne. Non-functionals—those too mutated to pass as normal—are cared for in an enclosure until they succumb to their deformities, taking them out of the gene pool.

But many traces of humanity remain; its myths have survived and become subverted—its protagonist parallels that of Orpheus, it features an allegorical Billy the Kid—and the world of myth has expanded: the Beatles turn into a legend of Greek proportion, the population believes in the great rock and the great roll, Elvis is a replacement epithet in for God. Like with many other SF stories from the same era, it reads like a psychedelic far-future fantasy, moreso because this novel blends so many mythological elements and allegories into its story-arc.

Lo Lobey is a shepherd in one rural village, a functional with hand-like feet and a musical machete-flute. He falls in love with Friza, a barely functional girl with secret telekinetic powers; one fine day, when he’s out shepherding with her, she dies under mysterious circumstances. In this world steeped in mythology and tradition, the village elders decide the crestfallen Lobey is filling the role of Orpheus (also, Ringo Starr), so he’s sent out to reclaim the dead Friza; the hope is he won’t make the mistake Orpheus did, and Lobey won’t turn around at the last second and lose his Eurydice. It turns out both Friza and Lobey are differents, as in, evolved super-mutants; Lobey can sense the music within a person, and can recreate it with his musical flutechete.

Along the way, he meets Kid Death, Friza’s killer, who prods Lobey along as he flings chiding discouragement; Spider the dragon herder; PHAEDRA, AI oracle of a dead past; the Dove, eternal sex-symbol; Green-Eye, a mute different undergoing a long-dead race’s ritual; and a bunch of other people (plus things!) not listed on the back cover which I’m not going to give away. For the most part, this is a journey tale, taking place in an ornate, far-flung future, a melting pot of Joseph Campbell’s Hero with a Thousand Faces, 1960s pop culture, literary leitmotifs, and the baroque far-future wasteland of Jack Vance’s Dying Earth or Cordwainer Smith’s Norstrilia.

The novel feels modern, with an array of deep concepts entwined with metafictional surrealism—snippets from the author’s journal, parenthetical footnotes from Lobey to further detail his narrative. Come to think of it, it feels more postmodern than modern (literary joke, nod and smile). The analogues to Greek myth and the hero-journey are unavoidable; the roles of myth, heroes, and stories are all examined. The parallels are surface-level and frequent, from the elders’ early retelling of the myths of Ringo and Orpheus, to Lobey’s fight with a bull-headed mutant biped as part of his first training steps on his journey to reclaim Friza. There’s a strong theme of language and mathematics, though I’m not the best candidate to go into those; the novel’s title comes from the intersection where Einstein’s theory of relativity (realism and logic) crosses Gödel’s incompleteness theorem (irrationality).

Digging deeper, you can find strands of Delany’s longer-standing thematic leitmotifs. Travel, for one, a geographical progression that parallels the author’s travels around Europe and the Mediterranean. But the novel’s macro-scale focus is difference, playing out in a future of mutant aliens possessing psionic powers (and more), struggling to keep the sense of “normalcy” left to them by their human precursors. You can read it as an allegory for nonconformity, perhaps, or the more obvious connotations it has for gender or ethnicity or sexuality—Delany self-identified as gay. In any case, it deals with The Other; in fact, a whole world of Others, clinging to a concept of normalcy and the self idealized by a foregone and vanished mankind. There’s a chill irony about a race of aliens taking on human husks, clinging to our faded memories, then trying to retain our aesthetic ideals of form; as they mutate and diversify, so does their concept of “functional” normalcy.

If my armchair psychology paints the book as dull or stodgy, that’s not my intent; it’s very accessible and engaging, never stopping you dead and beating you with grandiose concepts. Rather, it raises issues that crop up often enough to make you ponder, later, what the author is getting across; it’s sometimes frustrating to spot its intellectual discourse, its brilliance, and ponder through Delany’s insinuations in fits and grasps as you surmount its slopes. (I’ve seen several people say, as a compliment, that reading Delany makes them feel like their IQ is bleeding away; the novel aims to fly over the reader’s head, and not everyone likes that feeling of being out of their depth.) The novel never talks down to you—though you can accuse it of being pretentious, Delany being a self-proclaimed child prodigy—nor does it stoop to long, dry monologues of explanation: it’s all here, ready and eager to be read, but what it means depends on the amount of thought you pour into it. (I’m still not entirely sure what all was going on; I’ll re-read this one in another year or two, and ponder it some more in the meantime.)

Ace Books 19681 - 1970s - artist unknown (Dean Ellis?). I actually like this cover better, even though I understand its metaphors less than the book's.

On the back cover, Judith Merril—then editor of The Magazine of Fantasy and Science Fiction, the most literary of all the SF digest magazines—proclaimed Delany “comparable only to [Theodore] Sturgeon, [J.G.] Ballard, Vonnegut, and Cordwainer Smith.” Merril’s comparison is on target, in that the work is of staggering poetic and literary genius… so much so that comparing existing ’60s literary SF poets like Bradbury or Sturgeon to Delany is like comparing victorious Olympic athletes to a Greek god. Delany, with seemingly effortless ease, transcends genre conventions and SF expectations. He holds many secrets to his chest in The Einstein Intersection, and is slow to play his cards. Even when he does so, their greater meaning is often left to you to decipher; it’s a novel requiring introspection and re-reading to see all its layers and layers of nuance. The result is a cerebral, clever novel—perhaps too clever for its own good. Within its pages, you can see the rise of science fiction’s heady, insightful, and game-changing New Wave.

So, a high recommendation, but also several caveats and warnings: here be dragons, and the hodgepodge of hallucinogenic postmodernism, pseudo-intellectualism, self-referentiality, and genre irreverence that was the New Wave. (Plus enough generalized eclectic weirdness to cause readers to wonder, “Just how much drugs were they taking?”) It’s not as accessible as all the other stuff I review on here, like traditional hard SF or space opera or cyberpunk, subgenres which it shares only a parent umbrella genre and some passing similarities. It’s a book that starts with telling—technically, worse, a quote from Finnegans Wake—and has no ending, which should annoy the hell out of me… but it doesn’t. New Wave SF is a flavor not everyone finds palatable. It left a huge impact, expanding the boundaries of SF: not in creative setting or prophetic science, but, as this book does, in vision, style, and literary technique.