Following up on the last two reviews, The Warlord of Mars, the third of Edgar Rice Burroughs’ Barsoom series and my last review on the subject for a good while. Expect some spoilers if you haven’t read the first two books (duh); by this point, you should know what you’re getting into, who all the players are, and what Burroughs’ writing is like.

The Gods of Mars and Warlord of Mars are more one long novel split in half than two volumes; Warlord is a continuation of the earlier novel’s themes and plot, occurring after its seminal cliffhanger and long in-narrative intermission. It was serialized on the heels of Gods in the venerable All-Story Weekly, at the end of 1913 and into early 1914. (I’m still impressed how it’s continued to stay in print into the modern day, when not much other pre-’50s SF is well known.) This concludes my foray into Barsoom, kind of a mini-vacation as it were.

University of Nebraska Press/SFBC – 2003 – Michael Whelan. Until I do an Adventures in Art post on Barsoom or Whelan or something, this is the last time you’ll see this, I promise.

John Carter has waited with (im)patience for the long Martian year to pass, in order for Dejah Thoris (and Co.) to be freed from her prison. In the meanwhile, the Therns have been scattered, their rule and fortress shattered; the First-Born freed from the duplicitous rule of Issus and are in the middle of reconstruction on behalf the Green and Red Martians; Xodar the Dotar has been installed as their leader; Carthoris has returned to Helium to act as interim ruler, with the other supporting Red Martians as advisers; and Tars Tarkas has returned to the land of Thark to do whatever badasses do. Carter is left alone with his faithful hound Woola to pace and wait.

Doesn’t sound like there’s much plot to be had there, does it? Think again. Carter’s been worried about one of the First-Born he bested in the earlier novel—Thurid—undertaking some intrigue against him, so he follows the man on a late-night excursion. It turns out Thurid is undergoing some grandiose plot; an unthinkable one, too: siding with the High Thern, Matai Shang, to overthrow Carter and his allies. Worse, it turns out Thurid has a way into the prison cell, and makes off with Dejah Thoris and Thuvia as hostages! What ever will Carter do. 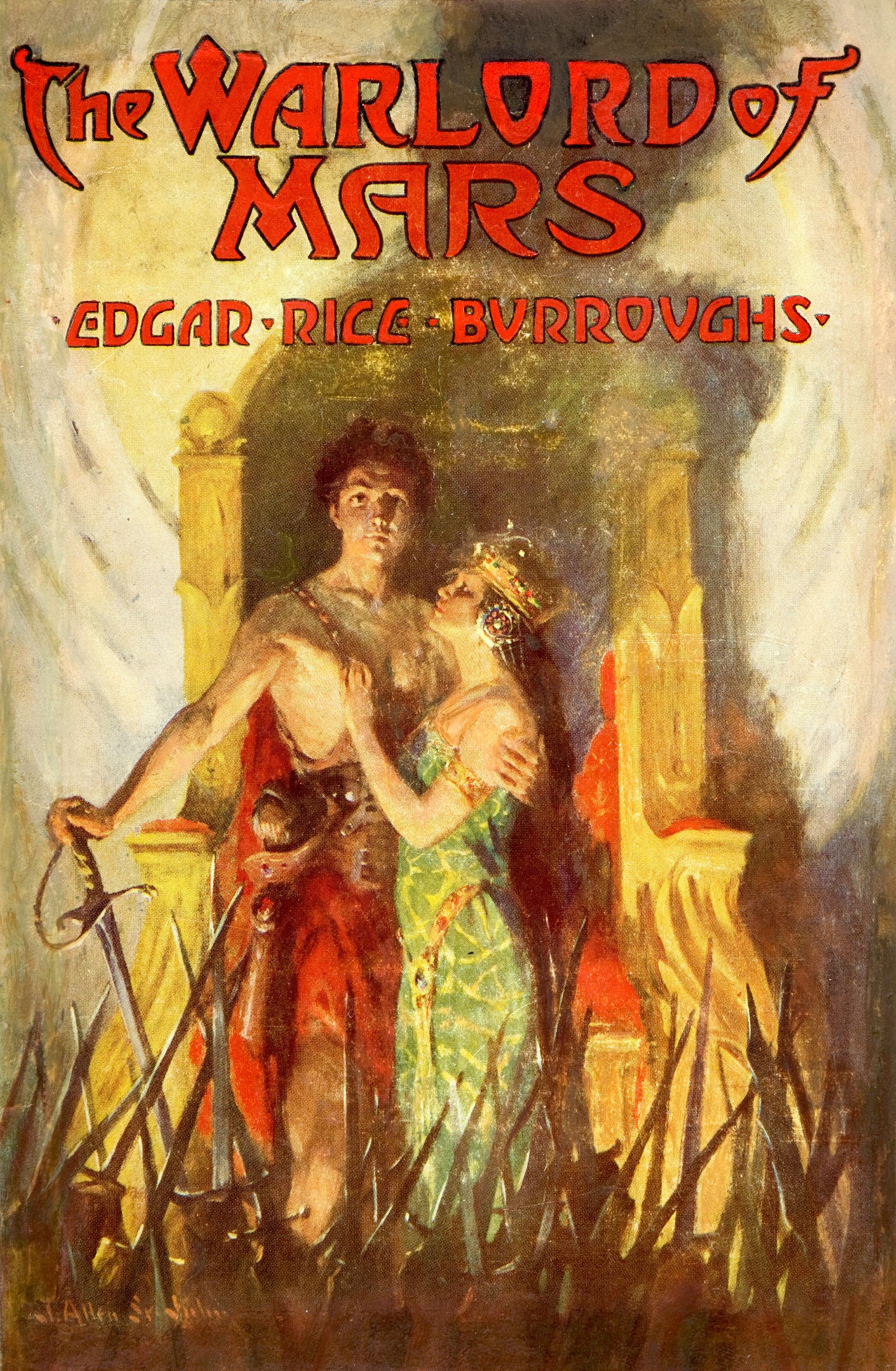 A. C. McClurg – 1919 – J. Allen St. John. St. John was a flawed and dated illustrator even in his day, but he was the first of many to dominate Burroughs’ cover visions.

Compared to Gods, Warlord starts off slower and on a smaller scale: no more epic fights and aerial battles from the start. Instead, Carter is overcoming other hazards, fighting a handful of well-trained Therns at a time, and progressing after his beloved Dejah Thoris only a few steps behind Thurid and Matai Shang. The action is more muted and down-to-earth when it’s one man against two, or Carter fighting gigantic insects; yet this is still a Barsoom novel. Steel sparks from clashing swords, close calls and deadly perils await, and Burroughs can make a two-flier chase just as thrilling, if not more, than his large aerial battles.

After the growing sense of scale and action in the second book, this third one brings it down to the small-scale. In a way, it’s a return to the first book—John Carter against the world, alone but for his faithful hound, lurking down dark corridors and taking on the enemies that crop up to bar his way. By the end, he’s collected a few new allies, meet up with some old ones, and plays a pivotal role in the last, epic battle, featuring a cast of unnamed thousands. But for most of the book, it’s Carter alone defying death and pursuing those who’ve kidnapped his princess.

Gone, too, were the previous novel’s strong female characters; by convenience they were all locked away in the same prison, and remained kidnapped together. Alas. The novel also introduces the Yellow Martians, who live up in the frozen North Pole in hothouses; again, raising concerns about racism. I never got a sense that Burroughs was being overt about anything—compare to Robert E. Howard, whose overt prejudices towards Mexicans and blacks was tangible, or H.P. Lovecraft, who treated anyone but privileged white New Englanders with hostile disdain, or the general “yellow peril” fears of the time that. Burroughs features evil Yellow Martians, yes, but also has a group of Yellow Martians who have Carter’s full support and friendship.

Ballentine – 1963 – Bob Abbett. More of Ballentine’s unique Barsoom; the paintstrokes give it a sense of texture, but it doesn’t fit the Barsoom image.

Thinking back, just about every race of Martian fits that dichotomy: a bunch who want to kill John Carter, and a bunch who he helps or who help him. And we end this book with all the Martian races united in a grand League of Martians, each giving mutual support and aid to the others. (In truth, regarding Edgar Rice Burroughs and racism, you’ll read into Burroughs the opinion you’ve already formulated. And I hear the Tarzan books are deplorable.)

To get into Barsoom, you must overcome three flaws. First, Burroughs’ writing—nobody reads Burroughs for his prose. Like Gods of Mars, it’s better than the first book, but it won’t win any awards for great writing. Second, its contrivances: Carter’s plans never go wrong, and when they do, or he fails, that just opens up an even better avenue of success. Things happen because they need to happen, making the book predictable; Carter’s characterization is variable and plot-dependent. And expect plenty of “cliffhangers” and “surprises,” many of which aren’t surprising in the least. Third, the male-centric escapist literature angle: it’s an adventure story as old as time, with a noble hero and evil enemies. There’s little character development to be had, since they’re all rather cardboard exaggerations.

I don’t have as much to say about this one; I guess I used up all the best stuff on the first two novels. Warlord doesn’t have as much wide-eyed sense of wonder as the first novel’s introduction to this strange new world, nor does it have the second novel’s speed or tension, chugging along on a diet of action sequences and cliffhangers. What it does have is a continuation, and conclusion, of the second novel’s plot-threads.

(Of course, you could just download them from Project Gutenberg.)

I have to say, reading the first three Barsoom novels in a row started to get tedious near the end of this one, from sheer overdose on action and cliffhanger, thrilling escapes and captures leading to more escapes, and more captures. Plot development becomes predictable after a while, which is my biggest issue with Burroughs. And while I liked Warlord, I felt its two predecessors were stronger. Bringing it back down to one man against the world, Carter alone going for broke, was a good move. But Warlord lacks the unique newness Mars has in Princess, or the tight plotting, strong action, and emphasis on religion (both as metaphor and setting texture) which made Gods such a strong novel.

Burroughs is capable of making a fun, adventurous literature, and the Mars series still attracts fans. He’s so very formulaic in reusing the same overcome-obstacles-to-rescue-girl plot; and dated, which should fall into the “freaking duh” category. I wouldn’t recommend it to someone trying to get into SF (unless they really liked older lit, or were younger and love high adventure). But for what Burroughs did—entertain—he did an admirable job.