So, back when I wanted to get Silverberg’s The Silent Invaders, I ended up buying a lot of Ace Doubles because it was cheaper than buying the one book. (Take note: lots are always better for the buyer, rarely the seller.) A lot which was otherwise composed of an obscene number of Jack Vance doubles. Six, now that I stop and count them. Donald Wollheim at Ace somehow reasoned that Vance was best partnered with Vance, so those six books total eleven of his thirteen Ace Double halves. I’ve read some of Vance, enough so to want more, and thought it would be best to start off my Vance Ace Double collection with the award winners: The Dragon Masters and The Last Castle.

In all likelihood, if you’ve read Vance more than once, you like his unique prose style, which is best described as baroque: Vance loves to throw out antiquary jargon and decadent description, so get used to aquiline features, somber magnificence, and characters responding with “Just so.” Vance’s stories are often a lighthearted, adventurous yarn with dark and dour underpinnings—case in point, The Dying Earth—even when he’s nowhere close to comic. Vance is something of an acquired taste—possibly the reason his Ace Doubles were almost exclusively backed with other Vance novels—but if you find his ornamental language and exotic settings pleasing to your palate, he had an expansive list of works for you to choose from.

In the future, what might be the last remnants of mankind lives on a single far-off planet, devolved into a simple feudalistic society, and lacking major technology. The reptilian Basics attacked this planet with their army of genetically-modified humans, capturing or killing most of the ruling powers; by chance the humans captured some Basics and forced a cease-fire. In return, the humans have been breeding their own “dragons” from the captured Basics’ eggs. That was generations ago, the last time the red star shone in the sky; it’s past time the Basics returned.

The novel alternates between major characters, both ruling nobles: a haughty prick (Ervis Carcolo), and a haughty slightly-less-of-a-prick (Joaz Banbeck, descendant of the guy who forced the cease-fire). Carcolo wants to invade Banbeck’s territory based on bad blood between the noble families, and because he’s too incompetent to support his own citizens, instead focusing on breeding dragons (poorly) and building barracks. Banbeck’s more concerned about the possible return of the Basics, but isn’t going to take this kind of aggression sitting down. Also of concern are a group of naked cave-dwelling mystics, the sacerdotes, who claim to have evolved past petty human emotions and refuse to influence others. And, of course, there are the Basics: reptilian aliens prowling about in spacecraft with their modified humans. 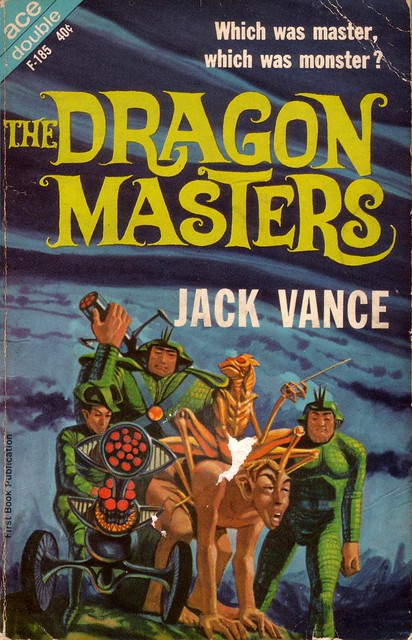 Ace Double F-165 - 1963 - Jack Gaughan. A surreal interpretation of Vance's modified humans and oppressive aliens; Gaughan had a monopoly on this text.

Dragon Masters is no exception to Vance’s indomitable style, an exorbitant science fantasy—that’s another thing about Vance: while he can stick to either SF or fantasy, he often blends the borders. While it’s set centuries in the future, with the last remnants of humanity and a starfaring enemy, it features a society that’s devolved back into a warring feudalism armed with pistols and blunderbusses. And they’re attacked by aliens in spaceships, with laser guns and modified humans. So, if you’re a stickler for Hard SF or plausible science, don’t expect much of that here.

Vance’s prose is in proper baroque eloquence, if not as highly-refined as it could be. And the setting is just as lush as anything else he put to paper. However, the pacing is disjointed: we start off in media res with a mysterious figure, then jump through several chapters of expository history explaining the last few generations’ worth of struggle and alien invasion, then we’re following greedy neighboring noble Carcolo. But while the roving focus and lack of explanation is a bit jarring, the story was intriguing enough to keep me going: explanations fall into place as the narrative progresses, early plot developments come back to have significance with a vengeance; overall it works.

Dragon Masters is not without flaws. The characterization is flat; Ervis in particular is one-dimensional. The plot is very straightforward, progressing from human-on-human conflict to human-on-Basic, without much real depth. And the combat itself consists of stilted small-unit struggles: a group of dragons goes here and does this, the survivors run away, some Weaponeers fire and explosions rack the Jambles, and so forth, each in their own way. It’s a little tedious. But Vance is quite capable of constructing scenes, a plot, a world from tone and word-choice alone. And while the plot is simple, it is at least interesting.

The novel has an interesting, if unintended, running theme of communication. The aliens speak in terms of destined certainties; anything which cannot conform is strange babble. Needless to say, the humans have a hard time getting their point across since it’s rife with non-certain irregularities, and the Basics’ argot flies over human heads. On the other hand, we have the secretive sacerdotes, who respond only to direct questioning. Even then they’re evasive, giving short, vague, and unspecific answers. Conversation between Ervis and Joaz isn’t without issue; Ervis just can’t wrap his head around any view that doesn’t conform to his own, which leads to his downfall.

The Dragon Masters was an oft-published Ace Double, maybe due to the fact it first appeared in book form there. Recently, it appeared in Subterranean’s Jack Vance Treasury, alongside The Last Castle, The Moon Moth, part of The Dying Earth, and the neglected short-story “The Mitr.” It’s also been printed by iBook and as a Vance Integral Edition. But despite the many editions, it’s out-of-print again; most of the recent hardcovers go for $40-100 on the secondhand market. Bah. 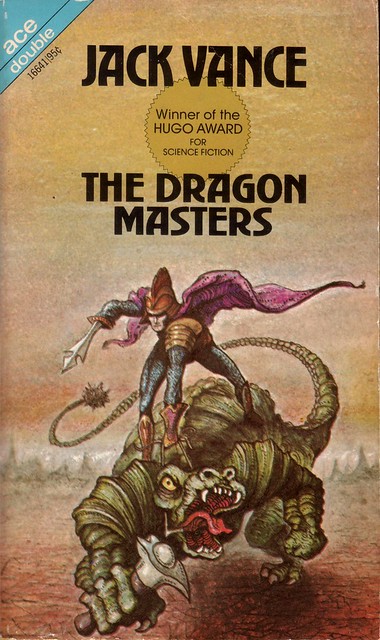 I’m kind of curious why The Dragon Masters won the Hugo for best novella/short novel. Not based on any perceived flaws as much as a lack of greatness: Vance wrote some fantastic novels, and this one ranks about in the middle of them. Vance’s personal style and tone isn’t as fine-tuned as in other novels, and the plot is bare-bones. Of course, looking at the other Hugo winners from 1963 is informative. The winning novel was Philip K. Dick’s The Man in the High Castle, a book I’ve always thought of as more important for its implications and vision than for anything that happens in it. Dragon Masters does reflect that era, a breakout and gradual transition from the ’50s Campbellian mold, branching towards SF’s new horizons.

It’s not a bad story, as they go: Vance never—AFAIK—fails to entertain. Having two races using captured, modified versions of the other to wage war is a fantastic idea, and it fits well into Vance’s ornate craft. But as with too much SF from the ’50s-60s, I’d have liked this fantastic idea taken further, rather than remain a unique concept in otherwise standard fare. Vance’s best? No; it’s not as fine-tuned or polished, and I know he can do better. It falls somewhere in the upper-middle of Vance’s output: solid but not flawless, enjoyable but not exceptional, a story worth looking into but not the apex of Jack Vance’s works. Which is code for a recommendation, but not a requirement.