Now we see the downside of publishing a double in the modern age: the UPC barcode. Doubles no longer have two fronts; placement of the glaring UPC code ensures that one side or the other will be the “back,” despite having dueling cover art. Plus it takes up valuable cover space, and on a mass-market paperback that’s in short supply. There could easily be another two trilobites on that cover. Ah well. Considering Silverberg’s half is a twenty-three-year-old reprint, and the other, John Varley’s Press Enter [] was a spry six years old, I guess this was to be expected.

I have to note, the version in the TOR Double is the original 1967 novella published in Galaxy magazine, not the extended novel that’s about twice the size, so much like what I did with The Silent Invaders I need to track down the big version for comparison. According to Majipoor.com, the novella is the version Silverberg (and the site admin) prefers; in any case, it’s what I have, so it’s what I read. If you’re familiar with the extended version and see any inconsistencies… that’s the reason.

Hawksbill Station is a penal colony at the other end of time: through the time-travel Hammer and Anvil devices, political protesters are sent back from the future (the early 2000s!) into the rocky Precambrian Era, ages before land-life evolves. The authoritarian United States government has decided this is the perfect place to put its rabble-rousers. Here they can do little to no harm to society; they cannot return home, cannot agitate, and have to formulate their own society to live in. Their prison wardens have regular shipments of supplies and new prisoners; even though they don’t know if the prisoners are alive, they feel obligated to provide them with sustenance. The scheme rides the border between humane and inhumane: the prisoners are cared for, and are still alive, but struggle against depression and insanity in their listless prison.

Hawksbill’s unofficial leader is a man named Jim Barrett, who has been here the longest. Lamed by an accident while exploring, he struggles to keep up his status as camp peacemaker and organizer. He spends most of his time keeping track of the other prisoners, helping the sick and the insane, keeping the rest organized and giving them set goals and rituals. The day-to-day monotony changes only when a new prisoner arrives—a new arrival like Lew Hahn is a new voice for the men to debate politics and economics with. But for an economist, Hahn knows little about economics, and lacks the fervent beliefs of a political activist. It’s only a matter of time before Barrett learns his secrets…

The setting is an odd blend of utopia and dystopia: the prisoners are at the end of their respective ropes, with many going slightly mad, yet the irony is they aren’t oppressed here. They are provided with the most basic provisions, but struggle to find a day-to-day purpose: they no longer have something to rebel against, forming their own collective and breaking from their rhetoric in favor of cooperative survival. Rudiger focuses his energy on the intensive study of trilobites, even though future scientists will never see his notes or samples. Others follow the rituals Barrett has in place, such as the annual trek across the rocky lifeless landscape to a lost sea several hundred miles away. For Barrett, being in control of the situation gives him a sense of purpose, a position of power in order to help the camp’s less-fortunate and less-sane.

If you don’t believe me when I say it’s oddly utopic in its outlook… your view of prisons is out of whack, because this is the most egalitarian prison I’ve ever seen. Instead of turning into a Lord of the Flies scenario, these diverse political opinions manage to form their own collective for survival, keeping many of the standards and norms of a civilization they can never return to. Their prison is hellish, but it could be a whole lot worse: their worst killer is insanity, their largest threat boredom.

The novel doesn’t have much commentary on crime and punishment, but it poses some serious questions about them. Whether this prison is humane or inhumane, for one; it’s akin to a Soviet gulag, without proper medical care and no creature comforts (no women so they can’t repopulate the earth; no entertainment), but one in which the prisoners are humanely treated, left alive, and have the freedom to govern themselves. The unasked questions are many: where is the border between humane treatment and inhumane punishment? Is it better to resort to capital punishment, or force prisoners to wallow in misery until they die? Is a free-range prison somehow more humane than one with walls and guards?

On top of that, few of the prisoners are described as having done anything to get them into this situation—most are anarchists, socialists, or communists who disagreed with the rise of syndic capitalism. The worst description we get is of one protestor who set off a bomb that made a half-dozen syndics ghastly ill. None are depicted as out-and-out killers; in fact, they’re terrified that the Station will turn into a dumping ground for murderers. These men sound like academics, armchair philosophers, and progressive college professors, not like bomb-throwing anarchists or Red insurgents: they’re more interested in discussing economics and politics, not smash the state or run riot. The irony and comparison to the Soviet Union’s reprisals against questioning the system is unmistakable.

All of the above might make the book sound dense and inaccessible; it’s not. At its core it’s a straightforward story about people, a prison, and time travel, with a pleasant mystery and nice revelation. The deeper bits are subdued, but present; they require some introspection to bring out. I think it’s a good balance, between the fascinating setting, solid if simplistic mystery, and slew of deeper questions to ponder. This would be my favorite kind of New Wave-style philosophical Soft SF: one that raises a lot of questions, and gets the reader pondering, but does so without getting in the way of an entertaining novel, or sacrificing characterization and plot. 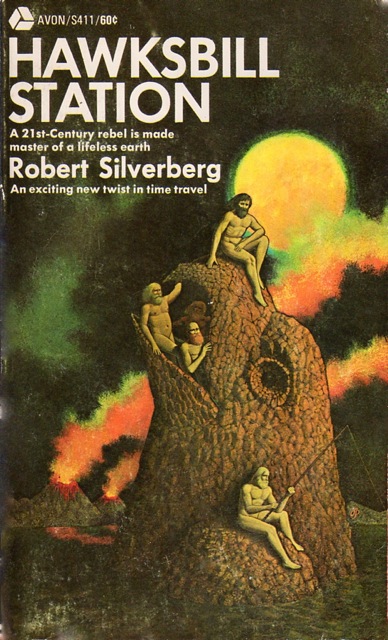 Avon – 1970 – illo by Don Ivan Punchatz. For a book that’s had a spotty run of covers, I’m partial to this one, even if it’s just a literal rendition of the title.

The extended novel version of Hawksbill Station is easier to get a hold of than the novella; while it pops up in numerous short-story compilations (including one on criminal justice; my Utopias professor would love this book), the TOR Double is the main way to access it on its own. Though it’s worth noting there’s a recent edition that includes both novella and the novel. It’s much easier, and much more likely, for you to run into the full novel version at your favorite bookseller.

Hawksbill Station is one of the best Silverberg entries—nay, one of the best science fiction books—I’ve read. It features everything a proper SF book should have: a fantastic and creative setting; a hook and enough mystery to keep the reader going; likeable but deep characters; commentary on us, as in humanity, in this case not just on society but culture, law and justice, philosophy, politics. When I picked it up, I figured to read a few chapters before I went to sleep, but ended up so engrossed that I finished the novel that night. It is the right length for a one-sitting read, and reading it in one sitting allows you to take in its spectacle without missing anything. I cannot recommend this story enough.