Another updated repost; let’s see if I can get this over 500 words, shall we? When I started posting reviews in 2009 I wasn’t sure what the hell I was doing, didn’t have a clear-cut formula or goal, and muddled through on short, insubstantial three-paragraph posts. I’ve kept those paragraphs but built more of a post around them.

Robert E. Howard is known for his many pulp creations—Conan, King Kull, Salomon Kane, Bran Mak Morn, et al—and for dabbling in the same style of horror as his friend, H.P. Lovecraft. Of course, like most other pulp writers, Howard wrote just about any genre to pay his bills—sea stories, adventures, sports, boxing, cowboy-and-indian westerns, and a number of quality historical adventure tales. Almuric is a product of Howard’s tastes—action-filled sword-and-sorcery, a genre he all but created—merged with the fascination of the time, science-fiction “Earthman transported to a savage planet” romances in the style of Edgar Rice Burroughs.

So, Almuric. When it first appeared in Weird Tales in 1939 as a three-part serial, it didn’t exactly push any envelopes, and was a rather thin novel. Its history explains that. Howard had started the manuscript in 1934 after a British publisher expressed interest his work but needed novels instead of short stories; he had several abortive attempts at novels, culminating in the Conan novel The Hour of the Dragon near the end of 1934. Where Almuric went after that, nobody knows; it’s indicated Howard “finished” it in 1936. Years after Howard’s death a copy showed up in the offices of Otis Adelbert Kline, Howard’s agent and former pulpster. As both Howard and science-fiction fantasies were all the rage, Kline prompted sold it to Weird Tales in ’39, and when Howard and sword-based-subgenres began booming in the ’60s, Ace reprinted it.

Esau Cairn, a man who shied away from sports for fear he’d injure somebody, killed a crooked politician somewhat by accident, and is on the run from the police. He requests a science-minded fellow help him, so the good professor whisks him away to an alien planet—Almuric—using some newfangled science device. There, Cairn is his element prime element: his brutish strength enables him to fend off monstrous creatures, putting him in good standing with the local barbarians and their beautiful princess. After a short period where he’s immersed in the harsh life on the planet Almuric, Cairn’s princess gets captured by monstrous winged humanoids. With barbarians in tow, Cairn sets out to topple these monsters’ rule, and free his love interest by force of arms. 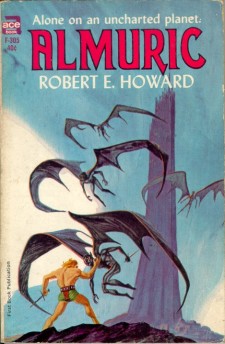 I wasn’t sure what to expect from the creator of Conan, Solomon Kane, Kull, and others. What I ended up with was a brief swords-and-barbarians romp involving a human transported to an alien world, very much in the style of Burroughs. It’s not exactly high literature, and the plot’s pretty basic, but it’s entertaining as hell. I hate to spoil the entire genre by saying it involves a lot of swordfights and brawls, an epic, climactic battle, and the hero getting the girl in the end. Don’t expect too much from this story and it will be pretty rewarding as a brief flight of fancy.

Howard didn’t write many novels—I think the lengthy Conan tale The Hour of the Dragon is the only other consideration—and it shows. [Doing some research shows those are half of Howard’s novels, the other two being the El Borak novel Three-Bladed Doom, and a novel for Breckinridge Elkins, a now-unknown mountain man.] Almuric has the definite feel of a short-story writing trying desperately to expand into longer works. There’s not really anything in the realm of character development, though the ending hints toward it, and the world’s setting and scenery seems rushed by at points. The plot and pacing are very reminiscent of other Howard works, with a lot of similarities, much like an overly long short story (though with only a few slow chapters).

One of the novel’s most interesting features is the relationship between Cairn and Altha, barbarian princess. She is the kind, lighthearted soul to balance Cairn’s mercurial hostility; two sides of the same coin. The ending of the novel indicates some of her gentleness will rub off on Cairn, but it’s brief and short, and comes as the novel concludes. She’s also a lot more developed than most women in Burroughs pastiches, but the brevity of the work prevents any strong character development. 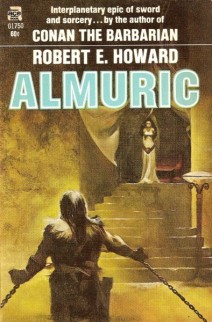 Many have accused Otis Adelbert Kline of writing the manuscript himself and passing it off as his own; a thin theory, given that Kline had a strong reputation himself, and many contacts in the industry. Likewise, he’s been accused of finishing the novel for Howard, being a Burroughs imitator himself. Given Kline’s meticulous attention to detail and pseudo-perfectionism with his own planetary romances, I doubt he’d have left Almuric in such a thin and flimsy state as it now exists. In either case, he left it under Howard’s name when he could have received a higher fee as co-author (50%) than as literary agent (10%). Never mind Almuric‘s tepid action sequences, and that Kline was an amateur fencer who loved writing swordfights.

Whoever finished the manuscript did a hackneyed job, leaving behind a rough, rushed work, and it’s surprising they didn’t accept co-authorship rights for higher pay. In the end, follow Occam’s Razor: the truth is probably the simplest explanation. Howard produced a semi-polished novel draft, left it behind in favor of more profitable (and better) works, died, and then Kline published the rough version he found.

Almuric is a bare-bones work: its plot is shallow, its action scenes uninspiring, and the setting consists of scattered details existing within a void. For all these flaws, it’s an entertaining work, and if not one of Howard’s best, it’s a good example of Howard’s craft—how he worked, how he tried to grow. All the staples of Howard’s work and the genre are there, and while they’re not as well polished as they could be, they still manage to gleam on occasion. Honestly I’ve read better Conan and Kane stories, but if Almuric works to get people reading those, it’s done a good job.

I have mixed feelings about Almuric. It’s a thin novel that is entertaining but forgettable, watered-down by its briefness and insubstantial nature, one with some good ideas that lack development. Almuric is an average telling of a derivative story, and makes for a better graphic novel than a prose one. It’s worth seeking out only for hardcore fans of R. E. Howard or Burroughs-style sword-and-planet novels.

Sometimes, I worry that I’m being too hard when I write reviews; in this case, looking back, I think was being too nice. Having re-read Burroughs and most of his imitators since I read Almuric, I see more problems with it: it follows the formula to the degree of fan-fiction instead of being its own novel. I realize not everyone can make sword-and-planet their own like Brackett did, but even Kline and Moorcock were writing more developed pastiche-homages. That Almuric‘s an unfinished manuscript—or at the least, a rough and hastily finished one—will alleviate some criticism. But seeing some of the more interesting ideas left barren and underdeveloped, such as the relationship between Cairn and Altha, is an irksome indication of the novel that could have been.

If I haven’t been clear already: it’s shallow and rough, feels incomplete, isn’t bad for a fun story, but there are better Howard works to read. Pick up one of the Del Rey Conan collections, or the Solomon Kane one, first.